Hemas to assist with Mangrove restoration

Hemas Consumer recently collaborated with the Wildlife & Nature Protection Society (WNPS) to restore the mangrove ecosystem at the Anawilundawa wetlands.

AN ELEPHANT DEAD ON EVERY DAY; EXTINCTION MAY NOT BE THAT FAR AWAY!

As reported in the media on the 25 th of March, the Secretary to the Ministry of Wildlife and Forest
Conservation announced that 83 wild elephants had been killed in as many days. As at the 29 th of March, and as per media reports, this number has now risen to 87. These are the number of carcasses that have been counted. Others may have crawled into the depths of the jungles to die, far away from the prying eyes of their tormentors.

WE DO NOT INHERIT THE EARTH FROM OUR ANCESTORS. WE BORROW IT FROM OUR CHILDREN

The WNPS Youth Wing invested a lot of time and effort into the “Stop Ecocide” mural which was presented as a statement by Sri Lanka’s youth for the Global Climate Action. The 70 x 20 work of art was the result of over a week of creative endeavor, by over 100 volunteers who were mostly the youth of Sri Lanka. 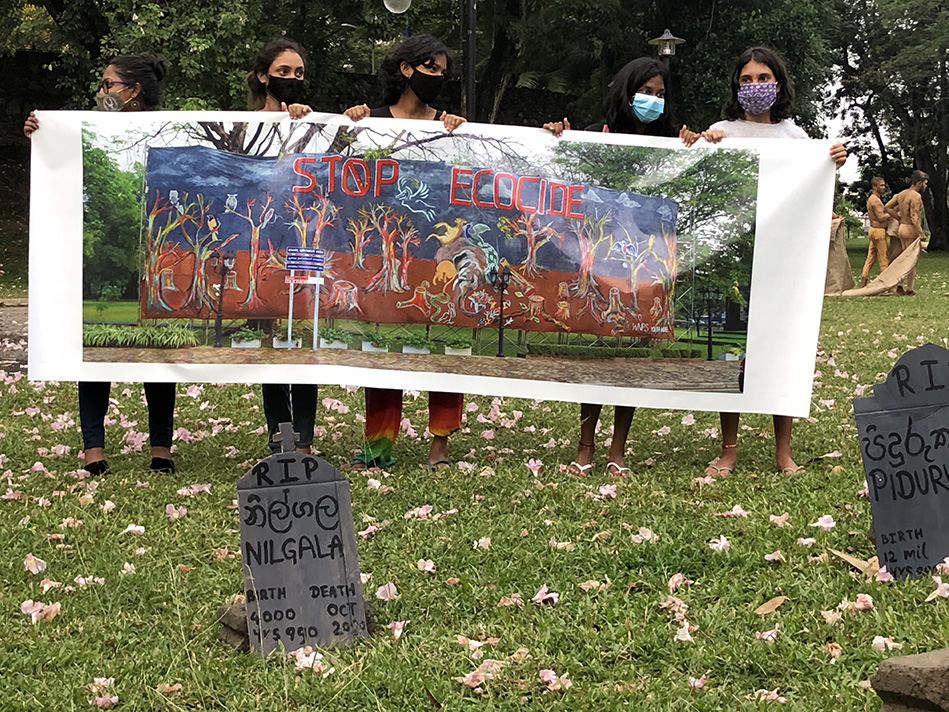 The Youth Wing of the Wildlife & Nature Protection Society (WNPS) made plans to share a statement for Global Climate Action (#StopEcocideSL), which is being held today. A work of art, a 70 x 20 mural pleading for a halt to the rampant Ecocide that is taking place in the country

WHAT SRI LANKA NEEDS IS A STRATEGY TO CONSERVE OUR MAJESTIC SRI LANKAN ELEPHANTS, NOT PLANS TO TAME MORE ELEPHANTS AND HOLD THEM CAPTIVE.

The Sri Lankan Elephant (Elephas maximus maximus) is an Endangered wildlife species. Even though Elephants have been used in captivity from ancient times, it is no longer ethical nor is it necessary to keep these majestic animals enslaved to fulfil the needs of man. Elephants were once used in the timber and logging industry, even during the time of the British Raj in the construction of the railway system, however we now have machines which can do the job, in a much more efficient manner and so Elephants are no longer used in these industries.

WILL SRI LANKA STAND SILENTLY BY UNTIL ALL OUR ELEPHANTS ARE GONE, BEFORE OUR GOVERNMENT REALIZES THEIR TRUE WORTH TO THIS COUNTRY AS A NATIONAL ASSET?

Most of Sri Lanka, the wildlife lovers, conservationists, activists and indeed the wildlife photographers who love capturing images of Sri Lanka's stunning tuskers, are reeling from the heart-breaking news of the killing of Revatha - one of the iconic  tuskers of Kala Weva.