Back to where the Big Cat roams 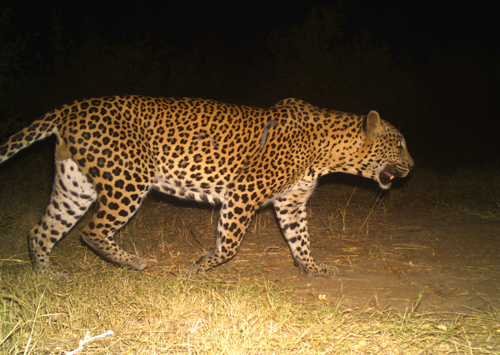 On the trail of the ‘one and only’ magnificent Big Cat in Sri Lanka, they trekked across the pristine wilds of the largest National Park in the country and their labours have yielded a deep insight into the lives and times of the elusive and secretive leopard.

Some interesting details are shared by researcher and wildlife biologist Dinal Samarasinghe (33) as Sri Lanka celebrates Leopard Day today (August 1), with a strong plea to preserve not only the Wilpattu National Park but also Protected Areas and Other State Forests (OSFs) hugging its boundaries. This would facilitate the protection of this exotic species and the predator-prey link which would enable leopards to continue to thrive, unlike elsewhere in the country and globally where their numbers are dwindling.

Sri Lanka Leopard Day has been declared on a proposal of the Wildlife and Nature Protection Society (WNPS) with one of the objectives being to ‘rivet’ attention on this species which is vulnerable to extinction. A joint declaration has been issued by the Department of Wildlife Conservation and the WNPS.

Looking closely at the lives of leopards, Dinal says that leopards are known to be solitary, going on walkabouts alone except when they are mating or the female has cubs. He fondly refers to a “big bloke”, a handsome dominant male, which is an inveterate loafer and “owns” a large territory.

The leopard is the only apex predator in the country, he says, explaining that it is at the top of the food chain. Sub-fossil evidence points to other predators such as tigers and wild dogs being here but from around 10,000 years ago, the leopard has been the sole apex predator, with the exception of humans, on the island.

Shouldering everything they needed for a full day’s work, the team crisscrossed the 1,316 sq.ft. National Park, from early morn, around 6 until 6 in the evening as the shadows lengthened, for five months from May to September 2018 – seeing the leopards (Panthera pardus kotiya) in their element during the day and capturing on camera traps their roaming at night.

The team went into Wilpattu to estimate population numbers (density) and structure in a large landscape. Long were the days, covering distances of 10-12km and stopping only for a simple breakfast or a late afternoon meal, provided by Kulu Safari, of rice, karawala (dried fish) and sambol or string hoppers and egg curry.

Numerous were the wild animals they stumbled upon on their forays to fix the camera traps – the tree snakes were non-venomous, laughs Dinal but there had been a heart-stopping moment when they had a close encounter with a bear, just an arm’s distance away.

“It was amidst the sand dunes and it was the bark of the bear that alerted us to how close we were to it,” he says, reliving that moment of terror. Fortuitously for them, the bear had decided on the option of “flight” rather than “fight”.

A scuffle in the shrubs, meanwhile, had drawn their attention to a bolting flash of gold and black – a leopard taking off, allowing curiosity to prevail until they came quite close.

Having walked the length and breadth of Wilpattu, the researchers are now being beckoned by other National Parks to carry out similar leopard studies.