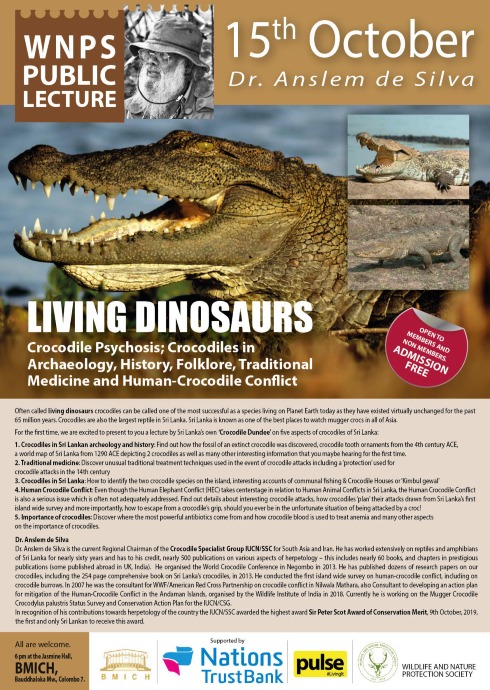 Often called living dinosaurs crocodiles can be called one of the most successful as a species living on Planet Earth today as they have existed virtually unchanged for the past 65 million years. Crocodiles are also the largest reptile in Sri Lanka. Sri Lanka is known as one of the best places to watch mugger crocs in all of Asia.

For the first time, we are excited to present to you a lecture by Sri Lanka’s own ‘Crocodile Dundee’ on five aspects of crocodiles of Sri Lanka:

1. Crocodiles in Sri Lankan archeology and history: Find out how the fossil of an extinct crocodile was discovered, crocodile tooth ornaments from the 4th century ACE, a world map of Sri Lanka from 1290 ACE depicting 2 crocodiles as well as many other interesting information that you maybe hearing for the first time.

3. Crocodiles in Sri Lanka – How to identify the two crocodile species on the island, interesting accounts of communal fishing & Crocodile Houses or ‘Kimbul gewal’

4. Human Crocodile Conflict: Even though the Human Elephant Conflict (HEC) takes centerstage in relation to Human Animal Conflicts in Sri Lanka, the Human Crocodile Conflict is also a serious issue which is often not adequately addressed. Find out details about interesting crocodile attacks, how crocodiles ‘plan’ its attacks drawn from Sri Lanka’s first island wide survey and more importantly, how to escape from a crocodile grip, should you ever be in the unfortunate situation of being attacked by a croc! 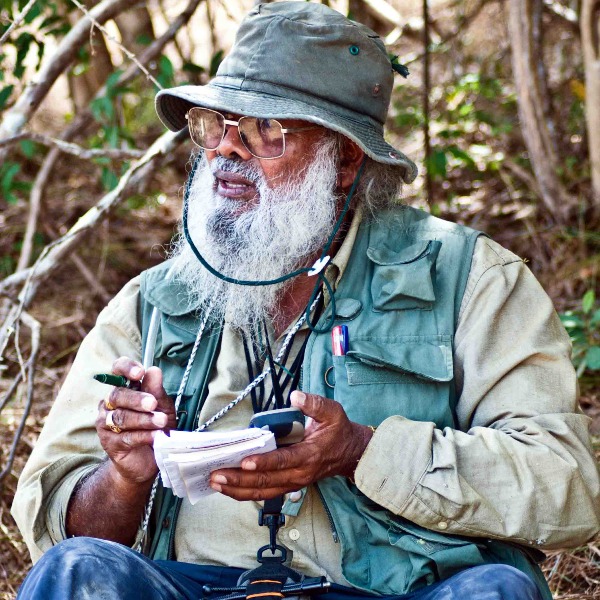 Dr. Anslem de Silva is the current Regional Chairman of the Crocodile Specialist Group IUCN/SSC for South Asia and Iran. He has worked extensively on reptiles and amphibians of Sri Lanka for nearly sixty years and has to his credit, nearly 500 publications on various aspects of herpetology – this include nearly 60 books, and chapters in prestigious publications (some published abroad in UK, India).  He organized the World Crocodile Conference in Negombo in 2013. He has published dozens of research papers on our crocodiles, including the 254 page comprehensive book on Sri Lanka’s crocodiles, in 2013. He conducted the first island wide survey on human-crocodile conflict, including on crocodile burrows. In 2007 he was the consultant for WWF/American Red Cross Partnership on crocodile conflict in Nilwala Mathara, also Consultant to developing an action plan for mitigation of Human-Crocodile Conflict in the Andaman Islands, organized by the Wildlife Institute of India in 2018. Currently he is working on the Mugger Crocodile Crocodylus palustris Status Survey and Conservation Action Plan for the IUCN/CSG.

In recognition of his contributions towards herpetology of the country the IUCN/SSC awarded the highest award Sir Peter Scot Award of Conservation Merit, 9th October, 2019, the first and only Sri Lankan to receive this award.

The WNPS Lecture is open all, Entrance Free.