The team are working on setting up 4 new locations in Thanmannama in the Hambantota District at the moment. The work commenced on Sunday and is scheduled to be completed later today. Jehan Canagaretna has been on site with the team overseeing the erection of the poles for the LRS.

As with most things, the LRS project has also been impacted by COVID. A few of the Army personnel that we are using to install the LRS and oversee the technical installations at the LRS sites have come down with COVID and are currently in hospital or in self-quarantine. Ongoing travel restrictions have also hampered progress by delaying installations at new sites.

The sites in Thanmannama will be the first sites where the LRS will be run alongside the village fencing system that Dr Prithiviraj Fernando and the Centre for Conservation and Research have been studying for over a decade. The two systems will be simultaneously in trial to ascertain if it delays elephants from becoming habituated to it.

We have continued recording data from our existing sites. A summary is shown below. A number of break-ins have occurred when the fence was not working or the elephants entered the property from a boundary that was not protected by the LRS. However, there have been a couple of occasions where the elephant(s) have broken through the fence as well. These incidents were reported from Mahiyangana and Udawalawe. 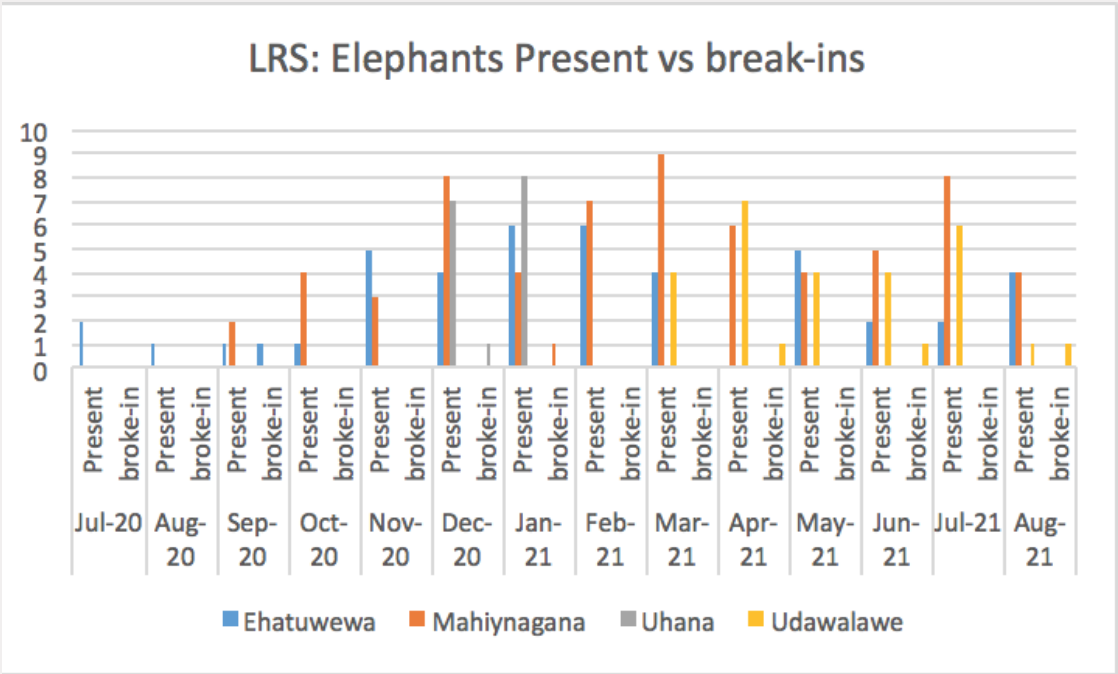 Hiring of a Project Coordinator

The WNPS has hired Mr. Srinath Amarasinghe as a project coordinator who will be tasked with visiting  the sites, building relationships with the residents, gathering data on the LRS and ensuring that the project runs smoothly. Srinath is familiar with the threats faced by elephants and he has prior field experience having worked at the Department of Wildlife as a temporary tracker. He is also capable of building and maintaining relationships with the farmers participating in the study. Contracts have been signed and he has been briefed on the WNPS's policies and procedures. Currently, his travel may be hampered due to restrictions that are currently in place due to the pandemic.

What's planned for the next few months?

The short term goal for the project are to get the remaining sites setup as soon as possible. Our target was to have all 25 locations up and running by the end of the year. However, due to the pandemic and the inter-district travel restrictions, the specific locations that need to be ear marked in the districts have been pushed back. The locations will need to be visited to ensure its feasibility of installing the LRS to ascertain the efficacy of the system. The plan is to have three(3) different types of LRS installed in the 25 locations in this manner:

- Two locations will be triggered via a PIR sensor when an elephant or other large animal is detected in the vicinity. We hope to have 4-6 sensors in each of these two locations.
- One location will have colored lights such as the system being tried out by Dr. Tempe Adams in Botswana.
- Most of the locations will have the usual LRS where the LRS will be activated at 6pm and shut off at 6am.

The project coordinator will visit each site at the minimum once a month and will spend a few days in each visit and will meet the farmers who are working with us to test the LRS. Travel will be dependent on restrictions which are enforced by the Government. The Coordinator will also work through what's required to gather data from a control site. The data provided by these control sites will be used as the baseline when calculating the efficacy of the LRS. He will also continue to call each location twice a week to gather the data via phone and record the same questions we have been asking.

The WNPS HEC Sub-Committee team will also conduct a number of site visits to ensure that the farmers remain focused on the LRS and continue to maintain the fences and lights as this is vital for us to gather data.
R