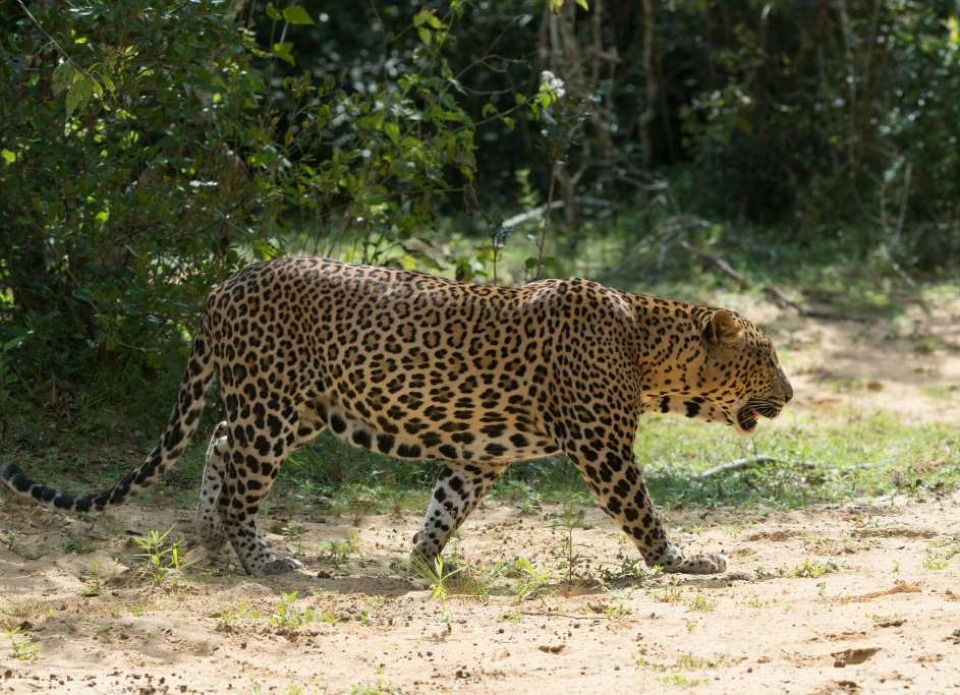 It is heartening to note that since this essay was written in 2004, many of the questions posed by the author are being answered by the steady and solid work carried out by several researchers, including Andrew Kittle and Anjali Watson, Enoka Kudawidanage, Dinal Samarasinghe, Rukshan Jayawardene, and the late Ravi Samarasinghe.

Recent researchers include the team from Yala Leopard Diaries, Dushyantha Silva and team, Sankha Wittanachchi and Leopocon. Many others such as Gehan de Silva Wijeyeratne, Jehan Kumara, Chitral Jayatilleke, Kithsiri Gunawardena, Luxshmanan Nadaraja, and Namal Kamalgoda, through their spectacular photographs, have put the Sri Lankan leopard on the world map.

We are now slowly but surely building a map of the distribution of the Sri Lankan leopard on the island; know that they are found in different habitats, and can survive in tiny fragments of forests; beginning to understand the way these animals use space in these habitats; what they eat; and when they are active. Sadly, we are also seeing, far too often, images of snared leopards, and learning also about increasing threats to these magnificent animals in the face of shrinking habitats.

Advances made so far are excellent. But we still have far to go to build a solid foundation of conservation action to secure the continued existence of the Sri Lankan leopard.

Sri Lanka Leopard Day, which is celebrated annually, was declared based on a proposal put forward by the Wildlife and Nature Preservation Society of Sri Lanka (WNPS), Sri Lanka’s oldest (and the world’s third oldest) nature protection society. The date 1 August – on which a thesis by Dr. Sriyanie Miththapala confirmed Panthera Pardus Kotiya as an endemic subspecies – has been declared National Leopard Day in Sri Lanka from 2021.

Unlike us Sri Lankans, who have spent decades theorising and focusing on elephants and are now attempting a hodgepodge of projects to conserve biodiversity in Sri Lanka, our neighbour India decided some 30 years ago to focus on their top carnivore, the tiger, Panthera tigris.

In 1973, based on the recommendations by a special task force of the Indian Board for Wildlife, the Indian Government, then led by Indira Gandhi, launched Project Tiger at Corbett National Park. Its primary aims were to maintain a viable population of tigers in India and to preserve, for future generations, areas that carried tigers, as being biologically important.

Specifically, the Government banned habitat destruction, habitat degradation, poaching of any species including prey species (which contributed to a decrease in the prey base), cattle grazing, and harvesting of forest products in these areas. It relocated entire villages to set aside nine reserves, with extensive buffer zones to ensure the increase of tiger populations. These reserves have since increased in number to 23.

Since its inception, scientific and long-term research has been carried out in many Project Tiger reserves not only to find out details of tiger biology and ecology, but also on the biology and ecology of its prey species. India now has an extensive database of knowledge of its top carnivore, so that solid scientific management plans can be formulated and implemented – not only at the level of ecosystems, but at the level of landscapes i.e., not working only within National Parks but on a national scale and regional scale, to ensure the conservation of not only its top carnivore, but also a multitude of other native and endemic species.

Project Tiger, like all projects, has its flaws and periods during which it has limped along, faltered, stopped, and started again. There are endless debates about the science of research carried out in some national parks and the national estimates of tiger populations which have been obtained by census, not sampling (the latter is the more rigorous, repeatable and scientific method of estimating populations). Project Tiger is by no means a perfect model; yet, at the end of the day, Indian scientists and wildlife managers have data on which to base their biodiversity conservation efforts. Because the current trend in conservation biology has shifted from the conservation of ecosystems to the conservation of landscapes that cut across state and national boundaries, Indian scientists and wildlife managers are able to contribute effectively and meaningfully to global efforts of saving the tiger and to global efforts of biodiversity conservation.

In the 90s, my doctoral research showed that the Sri Lankan subspecies (Panthera pardus kotiya) is unique genetically and morphologically. We know that in other parts of the world, the leopard is a highly adaptable cat, which lives in a variety of habitats from the cold Russian Far East, to the humid cloud forests of Malaysia, to the deserts of Namibia. We know that in most parts of the world, it eats medium-sized hoofed mammals, but can also preferentially eat primates or even small mammals when hoofed mammals are scarce. We know that unlike tigers, it can live in close proximity to humans.

With such a diversity of habitats in our island, is our unique subspecies of leopard as adaptable in these different habitats? We know that there are leopards outside national parks, living on the edge of survival – as we have heard of reports from Hantana of leopards coming into villages to prey on dogs – but do we know exactly where else they are, in what kinds of habitats they live, and how many of these leopards there are in the whole island? Apart from counts from Yala National Park, do we have scientific estimates of leopard populations in other protected areas?

Do we know whether Sri Lankan leopards switch prey in lean times? Apart from Yala National Park, do we know how far and where leopards travel daily? We know their home ranges in Yala National Park, but what are their home ranges in other parks, in other habitats? We know that shooting, spearing, snaring and poisoning leopards is increasing in Sri Lanka, but do we know whether there are specific threats in specific areas?

We need to know these answers, because each bit of research fits together like pieces in a jigsaw puzzle to give us the entire picture. We need to learn about this unique subspecies across its entire range in Sri Lanka, so that we can develop the big picture that transcends park boundaries and ecosystems. We need to know these answers because of the reality conveyed in the axiom “good conservation is based on good science”. Without data, we have no basis for conservation.

For several decades, Sri Lanka has suffered from the affliction of preparing management and conservation plans that are rarely implemented. We suffer from the disease of excessive workshops and flurries of activities that are never sustained. We need to break from that stranglehold for the conservation of leopards.

By doing so, we can ensure not only the wellbeing of this top carnivore, but also the protection of the rest of each community of which it is a part. By doing so, we will surely make biodiversity conservation in Sri Lanka meaningful and effective.

The history of wildlife protection in Sri Lanka is almost synonymous with that of the Wildlife and Nature Protection Society of Sri Lanka. At 128 years old, the WNPS is the third oldest non-governmental organisation of its kind in the world and was responsible for the setting up of the Wilpattu and Yala National Parks in Sri Lanka, and of the formation of the Department of Wildlife Conservation (DWC).

(This is the second and final part of a two-part series. Part one of Dr. Sriyanie Miththapala’s essay was published in The Morning Brunch on 2 August)

Current scientific data shows that elephant habitat in Sri Lanka has reduced by 15% over the last 50 years. It is an equally well-known scientific fact that when the habitat of a species is reduced, the species population declines. If the figures for elephant mortalities, from 2010 to 2021, are considered, then this is happening right now. 3,328 elephant deaths were recorded during this time. Whether there are 6,000 wild elephants in Sri Lanka today, as per a 2011 survey, or twice that number, at this rate of attrition, the continued existence of a viable breeding population is threatened. Add to this that current scientific research shows that there is a high mortality rate amongst calves, the forecast is bleak. In a study undertaken at the Yala National Park by the Centre for Conservation &amp; Research (CCR), it was found that 54% of all elephant calves died within two (2) years of birth. The main reason – malnutrition. This is being replicated elsewhere too.