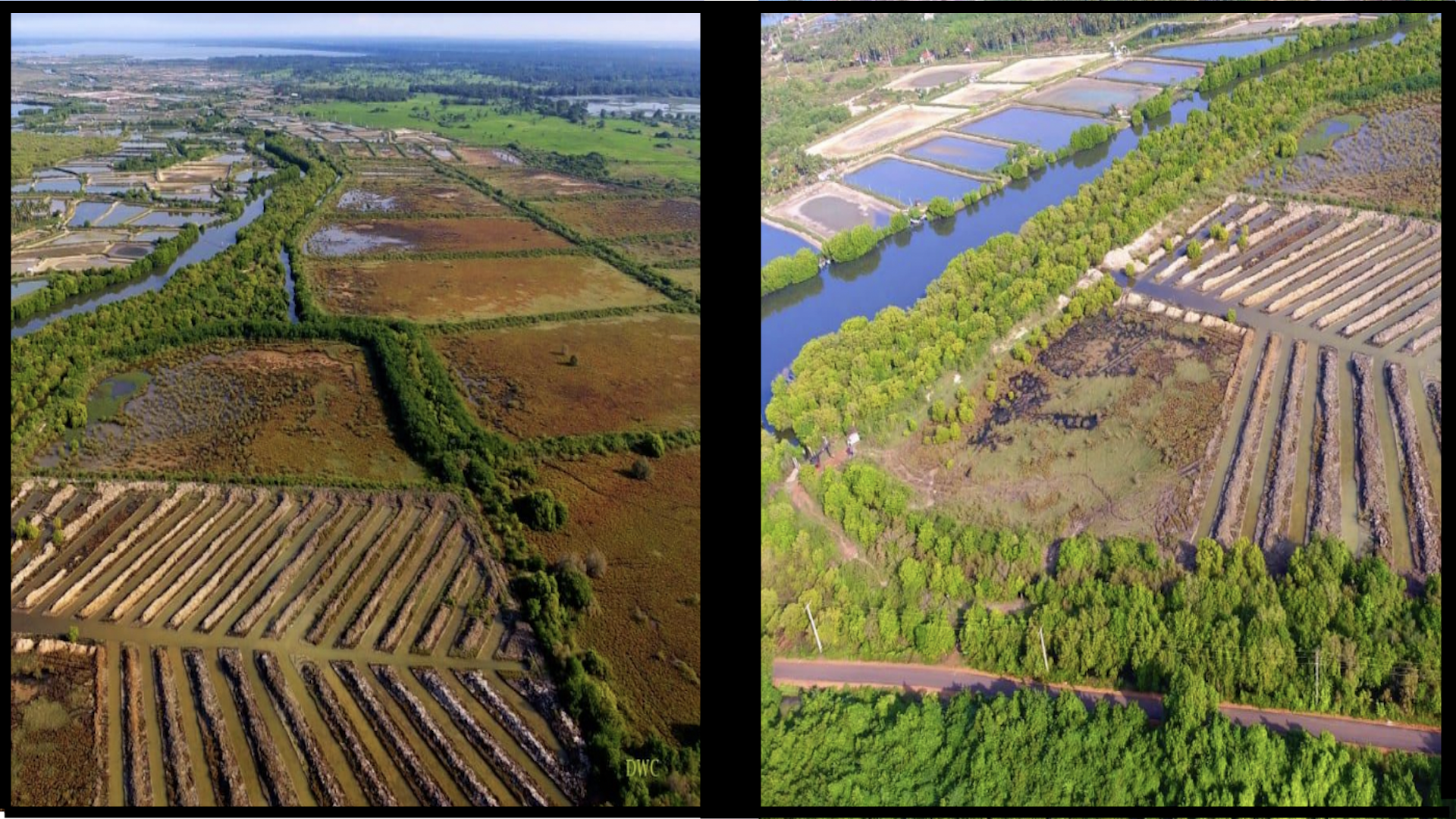 “If there are no mangroves, then the sea will have no meaning. It’s like a tree with no roots, for the mangroves are the roots of the sea!”
— Mad-Ha Ranwasii – Thai fisherman and village headma

Mangroves are a group of tree and shrub species that live along shores, rivers, and estuaries in the tropics and subtropics. They are remarkably tough and grow on muddy soil, on sand, peat, and coral rock. They live in water up to 100 times saltier than most other plants can tolerate.

Mangroves have several functions and adaptations for thriving in saline intertidal zones. They grow in an environment whose salinity ranges between freshwater and seawater.

But most importantly mangroves can fight climate change. Due to their ability to absorb carbon, mangrove forests are known as ‘carbon sinks’ or ‘carbon-rich biomes’. By storing excess carbon, they help reduce global warming as there is less carbon dioxide trapped in the atmosphere.

Sri Lanka is home to 21 species of mangroves. But sadly over 50 per cent of Sri Lanka’s mangrove forests have been destroyed irrecoverably in the past 30 years through deforestation, abuse and exploitation. But all is not lost yet.

The Wildlife and Nature Protection Society (WNPS) has initiated the Accelerated Natural Regeneration of Mangroves (ANRM) Project that is carried out with the partnership of the Department of Wildlife Conservation (DWC), the Department of Forests (FD) and Senior Lecturer – Environmental Science at Wayamba University, Head of the National Mangrove Expert Committee, and Director of the Environmental Foundation (Guarantee) Ltd., Prof. Sevvandi Jayakody.

“The project’s eventual goal is to restore approximately 40 hectares of the mangrove ecosystem at Anawilundawa, which was destroyed due to attempted prawn farming. Sri Lanka’s mangroves cover a mere 0.32 per cent of our landmass (12,000-19,000 Ha). We have a National Mangrove Policy and where mangrove conservation is concerned, Sri Lanka is right on top priority. The main aim of the project is how to regenerate mangroves in an existing eco system that was there previously,” Chair of the Marine Sub Committee – WNPS, Graham Marshall told Ceylon Today.

The National Policy on Conservation and Sustainable Utilisation of Mangrove Ecosystems in Sri Lanka was prepared with the aim of conserving the mangrove ecosystem facilitating sustainable usage.

“If you look at tree planting, we cut down trees but planting trees does not really bring a forest back. It doesn’t bring back the entire eco system from the little insect to the water flow to the fauna and flora. You have a particular species living and growing in a particular environment because they are conducive to that environment and ensure that they flourish and grow in that environment. This is all about the scientific natural regeneration of mangroves in Anawilundawa. The Forest Department is doing it further up in the Puttalam area. This project is about two years old. Part of this area was destroyed due to aquaculture and once these farms were abandoned after four to five years,” Marshall explained.

With its manmade cascading water system and an extent of 1,397 hectares the Anawilundawa sanctuary was declared as the second Ramsar site in 2001.“The Anawilundawa Sanctuary is one of six recognised sites in Sri Lanka. Apart from the various bird, fish species and amphibians living in the wetland, Anawilundawa also attracts many migratory birds. With an ancient history, Anawilundawa is believed to date back to the 12th century and is a manmade cascading water system, which stores water for irrigation purposes. It also plays an important role in flood control, retention of sediments and pollutants and acts as an aquifer recharge for the area,” Marshall said.

The wetland ecosystem has benefitted the local villagers he says by aiding fishing and other livelihoods but the biggest threat to the future of Anawilundawa is prawn farming.

“This project is done on a 100 acre extent of land. Sri Lanka’s species of mangroves grow in specific environments and different species grow only in mangrove habitats. Different species grow in adaptive conditions which involve water and soil conditions. Mangroves are associated with various types of fauna and flora from fish to prawns to aquatic animals to even birds and Anawilundawa is a bird sanctuary,” Marshall said.

“We are studying the environment and there are scientists working there. There are soil surveys going on. We are looking at species that exist around the area, the mangrove species, the fauna and flora. All these observations are been made. The Sri Lanka Navy (SLN) is there with a team doing elevation mapping and deep sea level mapping. This is important to ensure that we get the water flow from the Dutch canal into the mangrove habitat in a very systematic manner. We have to make sure that the proper quantity of water is given because too much water is bad and too little water is also bad,” Marshall explained.

He added that the SLN’s Hydrology Unit has stepped forward to extend their expertise in the very crucial, detailed hydrology study and survey to ensure accurate contour mapping of each of the blocks.

“This will ensure that each of the blocks will be supplied with the optimum amount of water for the healthy growth of plants. We have mud flats; we have wetlands and a few wetland patches within this 100 acre block. Nurseries are within the mangrove peripheries and forest. We check the plant growth at the nurseries and then take them and plant them in the mangrove habitats in the plots there. The plants are from the seedlings of natural plants in the habitat. The village communities harvest the seedlings. We call this ANRM,” Marshall explained.

But most important, he says is the community building and having to address basic needs. “You can’t run away from the fact that people have to survive, people have to eat. People got involved with prawn farms because they wanted the money. Now we are working with village communities around these habitats, educating them on the advantages and economic benefits of mangroves. For example they have additional fishing, prawn catching and they get honey because there are some species of mangroves that make honey, and also bird watching,” Marshall explained.

He added that there are loads of income facilities that these village communities don’t know about. Income generating that is much more sustainable. “We are educating prawn farming people to look after these areas because it is beneficial to them also. Around these areas there are paddy fields. Mangroves and mud flats prevent the salinity from the sea coming in. If there is too much salinity it will affect the paddy. To protect paddy fields we must look after the mangroves. We go to schools in that area to teach children all about mangroves whilst community development also takes place,” Marshall said.

The impact of climate change on island nations such as Sri Lanka he says is arguably underestimated. “Rising sea levels caused by climate change can have disastrous effects on island countries. Coincidentally, mangroves are one of the best defenses against climate change. Mangroves are also one of the most productive eco-systems on Earth and home to many hundreds of species of both flora and fauna,” Marshall explained.

The project objectives are to re-establish as much of the original biodiversity back into the regenerated area as possible by creating viable faunal and floral assemblages in the restored areas. To establish natural water flow and soil characteristics to enable accelerated natural regeneration of mangroves in the degraded abandoned prawn ponds. To provide ecological services to local communities from the restored prawn ponds and to ensure the restored area is enjoyed by all.

“Mangroves absorb up to four times as much Carbon Dioxide (CO2) as Tropical Rain Forests. Mangroves protect us from storm surges and catastrophic events like floods and tsunamis. Mangroves provide a source of livelihood like fishing for many rural communities. Mangrove ecosystems can support many livelihoods while storing globally significant quantities of carbon,” Marshall explained.

Stage 5 will include plants transferred from the nursery when suitable conditions have been established. Stage 6 will monitor plant survival and growth as well as colonisation by other species of plants and animals.

The WNPS was established in 1894 as the Ceylon Game Protection Society. Over the last 126 years, WNPS members have worked tirelessly to conserve Sri Lanka’s nature in all its forms. They are the third oldest nature protection society in the world and their milestones are closely intertwined in the country’s conservation milestones.

“In more recent times we have been involved in multipronged activities covering Awareness, Publications, Agitation and Legal recourse, Policy work, Reforestation activities (details to follow) and setting up the Youth Wing, and the Wild Kids to cater to future generations. We are by far the largest and most active conservation group in Sri Lanka and work primarily through our committees. We also work very closely with the DWC and most recently setup and funded an insurance policy to cover all staff of the DWC for death and disability. Most of our work is corporate and donor funded and run by a voluntary committee along with six full time staff,” Marshall explained.

He said the sponsors for the project so far are Hemas Consumer Brands, Lanka Environment Fund and Hayleys Advantis Limited. “Sri Lanka must do more to protect our existing mangrove habitats and focus on regenerating and restoring degraded mangroves. As such this project is hugely important for many reasons,” Marshall said.

Ceylon Today was unable to contact Prof. Jayakody for a comment on the present project. Prof. Jayakody joined the DWC as an Assistant Director in 1997 and currently serves as a Senior Lecturer at the Wayamba University of Sri Lanka.  She also served as the Coordinator for CITES CoP18 and currently serves as Chairperson of the National Mangrove Expert Committee, a member of Commonwealth Blue Carbon Initiative, a member of National Environmental Council and a Director of Environmental Foundation Limited.  Her research interests include coastal ecosystem management and policy and impacts of human disturbance on ecosystem processes and functions.

The removal of a top carnivore from an ecosystem can have an impact on the relative abundance of herbivore species . . . In the absence of predators, usually one or two herbivore species come to dominate the community. The consequence is often a direct alteration of herbaceous vegetation near to the base of the food web. Top carnivores have an important role to play in the structuring of communities and ultimately of ecosystems. Thus, the preservation of carnivores becomes an important consideration in the discipline of conservation biology” Dr. John F. Eisenberg